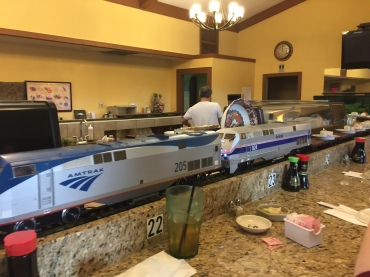 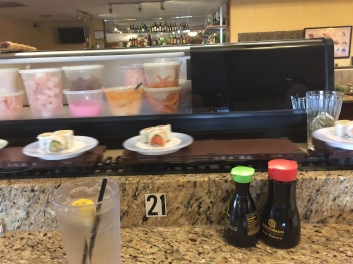 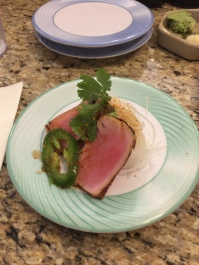 I’m not going to do this on every post like this, but for this first one like this I want to set the stage. I feel like this wasn’t just about getting sushi with two girls I had never met before. We didn’t do a lot as far as actions go in this event, but I enjoy new experiences and this is me documenting them, even if it’s just three girls who have never met before getting sushi.

I don’t remember the names of the sushi I tried, unfortunately. As they passed by me on the train I didn’t think to write them down like a real journalist would or anything. Before this past Memorial Day weekend, the only other time I had tried sushi via conveyor belt was in Cancún. Even that kind wasn’t the real deal because the sushi was packaged already if I remember correctly. It wasn’t bad or anything, but it was nothing compared to this sushi. Nothing because I can’t even remember how it tasted. Don’t get me wrong. Cancún is still an awesome place to visit, sushi aside. It’s not really known for the Japanese food. But you knew that already.

A sushi train is the kind of thing I can imagine seeing in New York. I bet they have that there. But I haven’t been to New York enough times to know for sure. New York does have excellent Taiwanese beef noodle soup though. I’ll give the Big Apple that. Enough about that though, this post is about sushi. It’s so exciting to see your food being transported to you like it’s a person travelling on a mission to reach your stomach. The train at Sakura Sushi Train Restaurant in Shawnee, KS off of Nieman is an Amtrak and very cute, reminding me of those Christmas toy trains, even though the train looks nothing like those trains.

The key to why the sushi tasted so good is the freshness. I mean, I kind of always knew sushi made and consumed right away tastes better than sushi that’s been sitting for a while, but I didn’t KNOW until I had this sushi. I’m sure the quality of the ingredients has a lot to do it with it too. People can spew a ton of facts at me, but until I experience it myself or see it firsthand, I can’t really grasp something as real.

I also think the excitement of meeting new people enhanced the whole experience. I made two new girl friends that day. One’s from the area and one’s from the East Coast like me. I love how barely five minutes in and we started talking about meeting guys and dating. I guess discussing relationships is a universal interest among women. It made for a good laugh. I remember talking about Orlando and Philly and how much the girl from the area loves sushi. Listening to these girls talk about who they are and what they like to do made me feel how normal it is to flow into a conversation with someone new. Once you start talking, everything else falls into place. Let’s just say I haven’t had good sushi in a while.

Who is this crazy writer?